Fantasy Masters predictions for Week 5 of the NFL 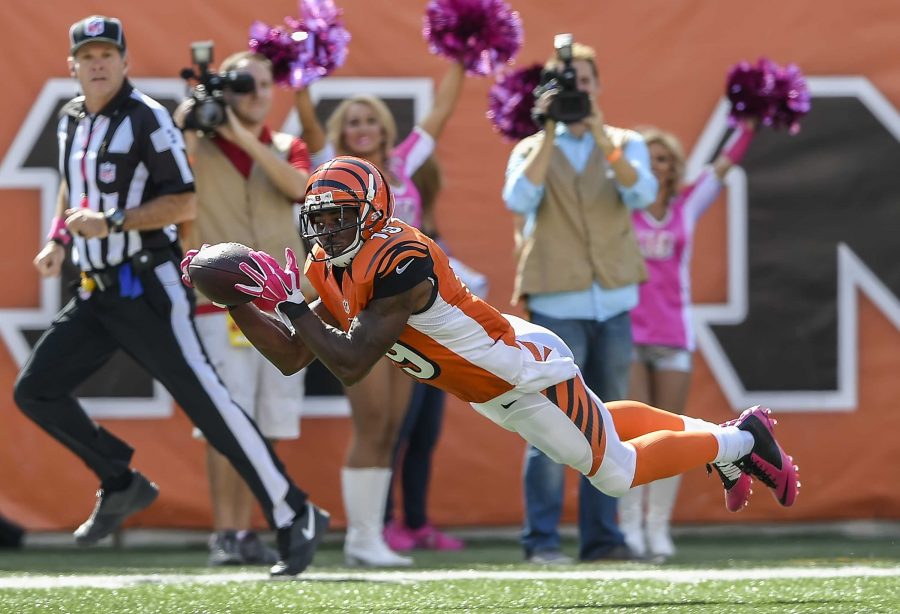 Why: Seattle has gotten off to a slow start, but the return of Kam Chancellor has vastly improved their defense. However, the Bengals have been dominant this year, and they should be able to handle a defense that nearly blew a late lead to Detroit. Cincinnati’s defense is stellar once again, and they should limit Seattle’s punchless offense enough to overcome the Legion of Boom.

Why: Seattle suffered two close losses to start the season, but has bounced back and won the last two. Looking to build off of that, the stingy Seattle defense will look to quell a dynamic Bengals attack, but they will not be able to. The Bengals have too much offensive firepower and their defense is just as good.

Fantasy Impact: For Cincinnati, quarterback Andy Dalton, wide receiver AJ Green, running backs Jeremy Hill and Gio Bernard, and tight end Tyler Eifert are must-starts. Dalton has been on fire to start the season and has avoided the mistakes that would ruin him against Seattle. Green and Eifert will be up against their toughest matchup to date, but both are elite players who haven’t been held in check by opponents in the past, and they should still produce at above-average levels. Hill and Bernard are a little riskier, since they split carries and neither has consistently had big games, but both scored last week and will see a lot of opportunities near the goal-line. The Seahawks only have 2 players worth starting, quarterback Russell Wilson and running back Marshawn Lynch. Wilson is an average fantasy quarterback but limits mistakes and adds value with his rushing ability. Lynch may not recover in time to play this week, and even if he does he’ll be limited by his hamstring, so he carries RB2 value at best. Don’t touch any of Seattle’s receivers, since the Bengals have a strong secondary and the Seahawks focus more on rushing and spreading the ball around.

Why: The Patriots have been absolutely dominant, having a better point differential than any of the 4-0 teams even only 3 games played. Tom Brady has been off to a terrific start and has been able to handle any defense thrown at him. Julian Edelman and Rob Gronkowski are fully healthy and Dallas’ limited defense has no one to stop them. Dion Lewis has been a stud in the backfield, and the Patriots should be able to outscore Dallas no matter how well the Cowboys play.

Why: To date, New England has looked like one of the only two elite teams in the league. Their D-Line creates problems in the passing game, their offense is uber-efficient, and they have one of the best quarterbacks in football. A solid running game has also emerged in New England in the two-headed monster of Dion Lewis and LeGarrette Blount.

Fantasy Impact: Brady, Edelman, Gronkowski, and Lewis are all must-starts this week. Dallas’ defense has been poor all season, and the Patriots are firing on all cylinders. No one can cover Gronk, and he’s the best tight end by a mile. Expect Lewis to get a ton of yardage on the ground and through the air, while Edelman is Brady’s security blanket. Deeper formats could see value in Legarrette Blount, who could vulture touchdowns on the goalline. For Dallas, Jason Witten and Joseph Randle are solid starts. Witten has provided above-average production all year and is often a checkdown for Brandon Weeden. The Patriots have been exposed by the run game this year, and Randle could have a big day. Wide receiver Terrance Williams is worth a start in deeper leagues, as he is the only real downfield threat Dallas has, but poor quarterback play limits his value.

Why: San Diego had gotten off to a slow start through the first three games, but their offense came alive last week. Philip Rivers finally looked like the star quarterback he is, and Keenan Allen, Stevie Johnson, Ladarius Green, and Danny Woodhead provide a solid receiving corp. Pittsburgh is loaded with Antonio Brown and Le’Veon Bell, but Mike Vick is nothing more than a game manager at this point in his career, and San Diego’s defense should easily handle Pittsburgh.

Why: Even without Ben Roethlisberger, The Steelers have enough offense to overcome a San Diego Defense that let Josh McCown and the browns throw for over 350 yards last week. Le’Veon Bell and Antonio Brown are dynamic playmakers that can spread the field, making way for role players like the returning Martavis Bryant, Heath Miller, and Michael Vick’s run game.

Fantasy Impact: There are big questions this week with Martavis Bryant and Antonio Gates returning. Martavis Bryant should assume a role as the second wide receiver and be productive, as Michael Vick’s deep ball is the best part of his game. On the other hand, Philip Rivers favorite target, Antonio Gates, may not see as large of a share of targets, as Ladarius Green has proved to be quite effective in his absence. Le’Veon Bell should be productive regardless of game flow and Antonio Brown remains a WR1 in the absence of Big Ben. Danny Woodhead and Melvin Gordon owners should have tempered expectations as Pittsburgh’s run defense is their only bright spot. Look for the Steelers to focus on the run first. This leaves a massive opportunity for Keenan Allen, who is a Top 5 wide receiver.