A closer look at the State of the Union 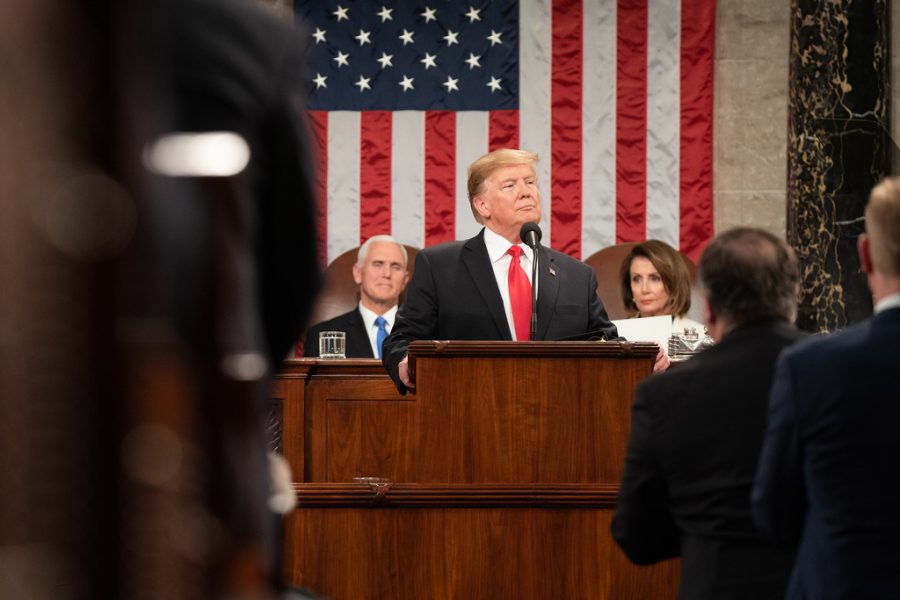 When Donald Trump gives a speech, it is way more than likely to be fact checked. So when Trump’s postponed State of the Union finally happened this past Tuesday, multiple articles regarding the speech included fact checks.

The State of the Union itself covered multitudinous topics including an attempt at bipartisanship, the separation of church and state slowly slipping away, volume two of the Cold War, and a brag about saving America from nuclear war with North Korea.

And it wouldn’t be an event in which Trump spoke if there wasn’t an attack on the “Russia investigation.” With Trump saying things such as, “an economic miracle is taking place in the United States — and the only thing that can stop it are foolish wars, politics, or ridiculous partisan investigations” and “if there is going to be peace and legislation, there cannot be war and investigation. It just doesn’t work that way!”

Without further ado, I’ve compiled a list of 20 claims made by President Trump in his address along with the facts that either make or break his statements.

1. “In just over two years since the election, we have launched an unprecedented economic boom — a boom that has rarely been seen before. We have created 5.3 million new jobs and importantly added 600,000 new manufacturing jobs.”

According to ABC 6, approximately 4.9 million jobs have been created since February of 2017, which includes 454,000 manufacturing jobs. Sounds like someone likes rounding up.

2. “Nearly 5 million Americans have been lifted off food stamps.”

Another case of heavily rounding upwards can be seen in Trump’s claim of Americans being lifted off of food stamps. According to the Supplemental Nutrition Assistance Program, about 3.6 million people have stopped receiving food stamps since February 2017. Not to mention that experts have been saying that the only reason for the decline is due to the improvement in the economy.

3. “Unemployment has reached the lowest rate in half a century.”

According to the Bureau of Labor, while unemployment shifted downwards to 3.7 percent in September 2018, which did, in fact, mark the lowest rate of unemployment since December 1969, it’s moved back up to 4 percent in January 2019.

4. “African-American, Hispanic-American, and Asian-American unemployment have all reached their lowest levels ever recorded.”

5. “More people are working now than at any time in our history… 157 million.”

Even though this is roughly accurate, population growth has always had the U.S. continually hit historic employment highs. In fact, since the Great Recession recovery, the country has been virtually setting records every month since the middle of 2014.

6. “We passed a massive tax cut for working families and doubled the child tax credit.”

This point is just point-blank laughable. Multiple Twitter users have expressed their disbelief in Trump’s claim of a “massive tax cut” for working families.
“My oldest son, who works for the railroad, has ALWAYS gotten a refund,” Twitter user Katie Johnson said. “This year, he got socked with a tax bill of $8,000+. So, nope, not helping the middle class.”

7. “Companies are coming back to our country in large numbers thanks to historic reductions in taxes and regulations.”

“Tax pros say there’s not enough incentive in the new law to convince companies to onshore their intellectual property and many of the workers [have] moved to low tax countries, like Ireland, Singapore, and the Netherlands,” Bloomberg reporter Laura Davison said on Twitter. “And, some manufacturers — including GM and Carrier — have recently announced plans to move jobs to Mexico despite a tax law that was designed to favor an ‘old school’ brick and mortar economy. The forces of globalization are strong.”

8. “As we speak, large, organized caravans are on the march to the United States. We have just heard that Mexican cities, in order to remove the illegal immigrants from their communities, are getting trucks and buses to bring them up to our country in areas where there is little border protection. I have ordered another 3,750 troops to our southern border to prepare for the tremendous onslaught.”

So, obviously, the migrants seeking asylum (which is legal) in the United States are preparing for a total throwdown at the border with the U.S. military… can you sense my sarcasm? This whole debate about the caravan has been previously debunked so I’m not going to spend much time on it. Besides the fact that the main reason Trump seems to be so obsessed with it is because he can use it to validate the fears of his conservative base.

9. “Wealthy politicians and donors push for open borders while living their lives behind walls and gates and guards.”

“Wealthy politicians” and “living their lives behinds walls and gates and guards” sounds a lot like you, Donald, don’t you think?

10. “Tolerance for illegal immigration is not compassionate — it is cruel. One in three women is sexually assaulted on the long journey north.”

According to PolitiFact, this is “half true.” The “one in three” figure comes from a 2017 Doctors Without Borders report, which came from a 2015 survey of more than 400 migrants in shelters, where most of those who were surveyed were men.

11. “Tens of thousands of innocent Americans are killed by lethal drugs that cross our border and flood into our cities — including meth, heroin, cocaine, and fentanyl.”

While most drugs that come into the United States are from across the Mexico border, a wall would, in no way, halt the flow of these substances. In fact, most of the drugs that Trump mentions are smuggled through legal ports of entry or underground tunnels. Not to mention that he forgot to include the death toll caused by prescription drugs overdoses, which alone outweigh the number of lives claimed by cocaine and heroin combined.

According to PolitiFact, there is virtually no way to document how many Americans have been murdered by “criminal illegal aliens” because there is no such national database on murders committed by illegal immigrants. And while, yes, some immigrants have illegally committed murders, a whole lot more research indicates that immigrants are much less likely to commit crimes than native-born Americans themselves.

“A single person could have committed multiple crimes; the tally includes people charged, and a charge doesn’t mean that a person is guilty; the most common crimes for which immigrants were charged or convicted were traffic, drugs, and immigrant law violations,” PolitiFact’s Miriam Valverde said.

14. “This is a smart, strategic, see-through steel barrier — not just a simple concrete wall. It will be deployed in the areas identified by border agents as having the greatest needs, and as these agents will tell you, where walls go up, illegal crossings go way down.”

The whole idea of a wall still befuddles me. Thoroughly. Especially since a large portion of these “illegal crossings” aren’t illegal border crossings in the first place. A 2017 study by the Center for Migration Studies estimates that visa overstays accounted for 42 percent, 4.5 million people, of the total undocumented population in 2014. Additionally, overstays are predicted to be made up of two-thirds of the total number of immigrants who became unauthorized in the U.S. that same year.

15. “San Diego used to have the most illegal border crossings in the country. In response, and at the request of San Diego residents and political leaders, a strong security wall was put in place. This powerful barrier almost completely ended illegal crossings.”

The “powerful barrier” that was established around 1996, pushed migrants who would have previously crossed the border into San Diego, California, into remote areas where these same migrants often die of dehydration and hypothermia.

16. “The border city of El Paso, Texas, used to have extremely high rates of violent crimes — one of the highest in the country and considered one of our nation’s most dangerous cities. Now, with a powerful barrier in place, El Paso is one of our safest cities.”

According to Vox, El Paso never ranked among the most dangerous cities and had had low rates of violent crime before the fence was built along the Rio Grande back in 2006.

17. “No one has benefitted more from our thriving economy than women, who have filled 58 percent of the new jobs created in the last year.”

According to PolitiFact, the number of women, and men alike, in the workforce is simply driven by population size, which has grown over time. And this 58 percent is below what it was from, approximately, 1995 to the Great Recession, where women’s employment rate was around 59 to 60 percent. Not to mention that women in the workforce fell from 73.9 million to 73.6 million from December 2018 to January 2019.

18. “Already, as a result of my Administration’s efforts, in 2018 drug prices experienced their single largest decline in 46 years.”

According to AP News, Trump is citing statistics so he can exaggerate a slowdown in prices. However, data still shows that drug prices are rising, just more moderately. The Consumer Price Index for prescription drugs showed a 1.6 percent increase when comparing 2018 to 2017.

19. “Lawmakers in New York cheered with delight upon the passage of legislation that would allow a baby to be ripped from the mother’s womb moments before birth.”

Many claims about this highly-debated piece of legislation have circulated the news and social media alike, and most distort the circumstances covered by the Jan. 22 law. According to PolitiFact, women in New York could previously only get abortions after 24 weeks of pregnancy if their lives were threatened. Now, under the Jan. 22 law, women can get an abortion after 24 weeks if their health is threatened or the fetus isn’t viable. Late-term abortions are incredibly rare and typically due to medical crises, which is supported by the Guttmacher Institute and the Centers for Disease Control and Prevention, who both report that only slightly more than one percent of all abortions occur after 21 weeks.

20. “When I took office, ISIS controlled more than 20,000 square miles in Iraq and Syria. Today, we have liberated virtually all of that territory from the grip of these bloodthirsty killers.”

According to NBC News, while almost all physical territory that has once been held by ISIS is now gone, military officials warn that ISIS still has thousands of fighters and could easily reclaim their “lost” territory without a U.S. presence. The Center for Strategic and International Studies has also estimated that ISIS was still carrying out “an average of 75 attacks per month in 2018.”