Raiders bring the heat on a frigid Homecoming night 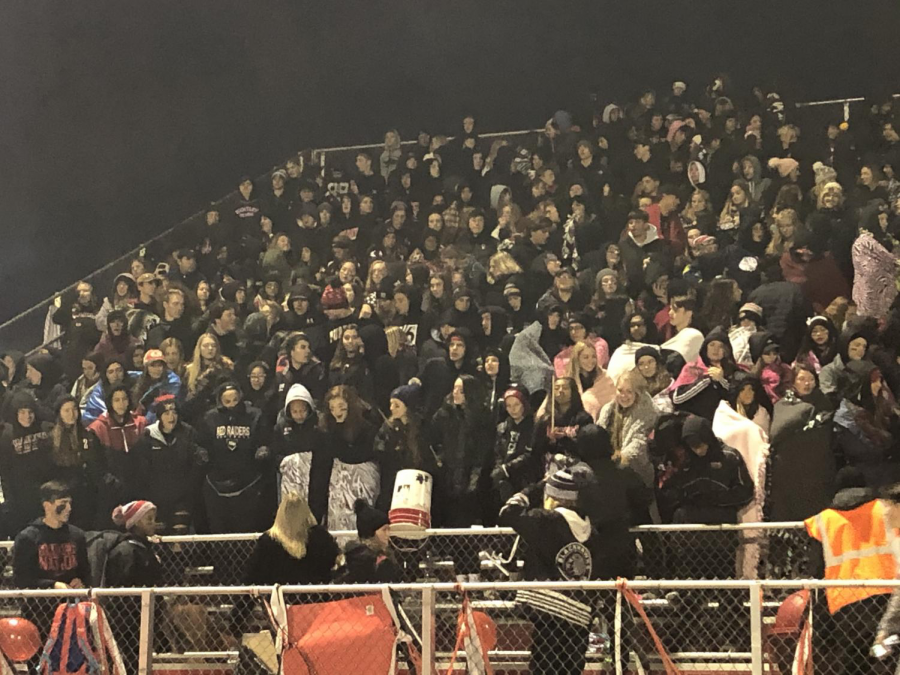 The grey-layered clouds raced across the sky, bringing with it the whipping wind that sent a chill through everyone at the game. The football players, dressed in jet black uniforms and bright red helmets, march onto the field with a sledgehammer in hand. Anticipation swelled from the packed stands of students and parents who endured the chilling temperatures to watch this team. It is time to rock Homecoming night.

Looking into the stands, the fans were in gear that created a blackout when still and a bouncing black wave whenever there was excitement on the field. The band and cheerleaders pumped up the crowd as the Raiders took the field. Everyone was ready to beat Hampshire.

It took no time before the Raiders got the game started. Junior Alex Janke took the opening kickoff 81 yards to the house for a touchdown, which would ultimately set the tone for the rest of the game.

On the ensuing drive for Hampshire, a sack by senior Conor Rice forced fourth down and the Raiders broke through Hampshire’s line. They blocked the punt attempt as sophomore Jacob Freitag scooped the ball up and scored. This put Huntley up 14-0 not even two minutes into the game.

The next drive for Hampshire was met with disaster once again, as junior Grant Weishaar intercepted the ball and returned it 46 yards for another touchdown, putting the Raiders up 21-0 with seven minutes left in the first quarter. Defense continued to bring pressure with a combined sack by seniors Matthew Burba and Mitchell Murray and another sack by junior Brad Walker.

Early into the second quarter, junior Ryder Havens scored a 3-yard rushing touchdown to extend the Raiders’ lead to 35-0 with nine and a half minutes left in the quarter. They would also add another sack by junior Tristan Carone and another 3-yard touchdown run, which had the Raiders heading into halftime with a dominant 42-0 lead.

In the second half, Huntley would add an 18-yard touchdown pass to senior Cade Whiteside, a 52 yard run by senior Pasquale Ricciardi, and a 4-yard touchdown run to cap off the scoring, along with a sack by senior Tanner Crisp.

“After that, we just went out there and we just kept on going. The defense just really stopped them, we scored so many times on defense, it was just insane,” said Janke.

The final score of the game was 56-0. They held Hampshire to an embarrassing -3 yards of offense for the game and -53 rushing yards.

“Well, I mean it’s great for the kids, I mean, I love seeing old players come back and watch us play, but it’s all about [the current players] and all of them enjoyed playing in front of their home team and in front of their crowd and so I’m very happy with the way they played,” said coach Matt Zimolzak.

The Raiders move to a 6-1 record with two games left in the regular season. This win speaks volumes about how the team can win no matter how cold it may be.