Karly Melendy expresses herself through art 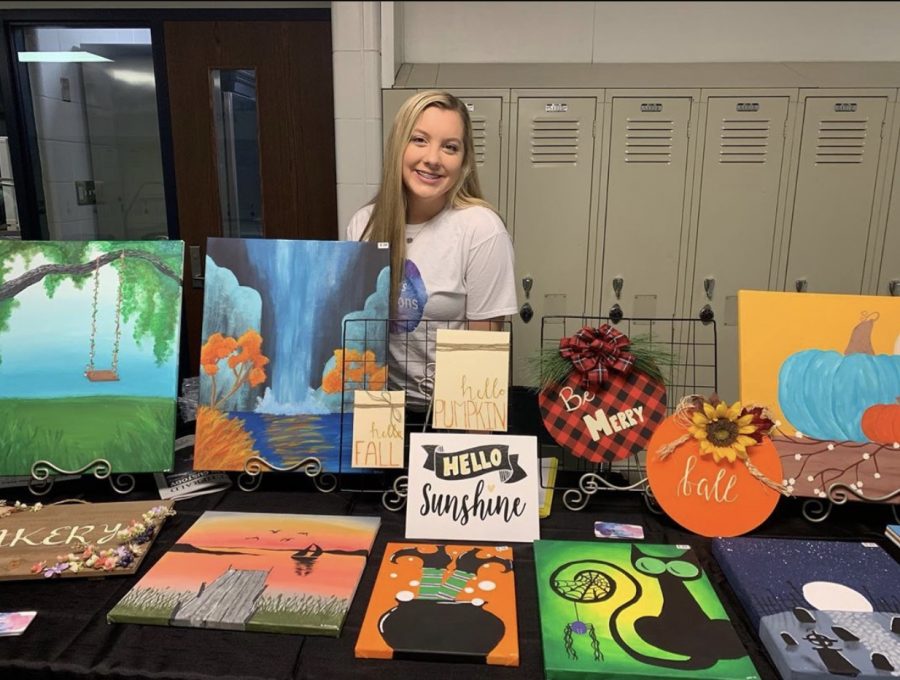 As she walked into Conant High School for one of her very first craft shows, Karly Melendy took a deep breath and was excited, but nervous about showing off her paintings to hundreds of craft lovers. Waiting for the storm of people to come rushing in, she sets up her canvases covered with vibrant colors, on a 10 foot table, placing each painting perfectly adjacent to the next. Now ready for the 8 hour day to begin, she begins showing Karly’s Kreations.

Melendy is a senior involved in the Medical Club, Link Crew, LEO’s club, and art classes at the high school and due to her recent interest in art, she travels to different art shows, with the hopes of letting others see her visions.

“On my 16th birthday, someone surprised me with a painting picnic. We sat outside and had a blanket, music was playing, and I just really wanted to paint. I then realized that I was not too bad,” Melendy said.

She had always been a very artsy child. Growing up doing pencil drawings and coloring, she knew that she had a hidden talent for being creative and showing her talents on a canvas.

“It’s only been a year and a half, so I haven’t been doing it for a very long time. But, it’s been such a big stress relief from school and wrapping up high school,” Melendy said.

Although her time painting has been limited, she feels that painting has opened up a whole new world. She is able to put her thoughts and visions onto a board and share it with the world, which she believes is the most rewarding part.

“I don’t paint for the money. I paint because I want my paintings to be in someone else’s home,” Melendy said. “The money helps but it’s not what drives me.”

When Melendy first started painting, she didn’t have a single thought about selling her pieces. It was when a friend told her how amazing she was and that she had pure talent.

“Painting is something that’s mine. It gives me a sense of accomplishment. Going from an empty canvas to a completed, signed piece, is such an amazing feeling of “I did that”,” Melendy said.