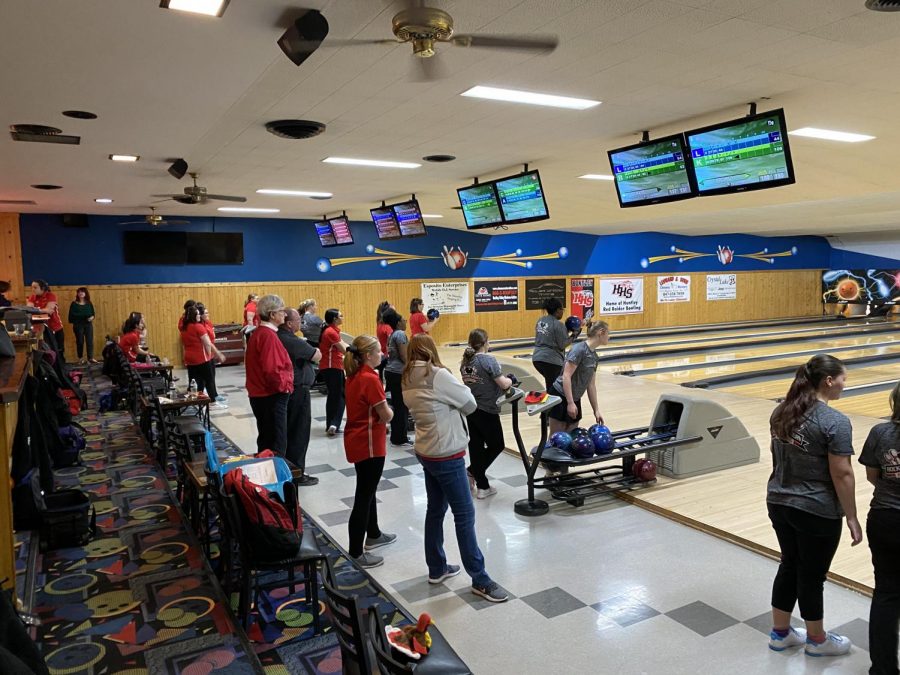 On Dec. 16, Huntley High School’s girls bowling team faced Rockford Auburn at Bowl-Hi Lanes in Huntley. The team, unfortunately, had an unsuccessful meet tonight. However, this will not stop them from pursuing an incredible season.

As parents line the walls of the venue, the girls scatter themselves between 10 different lanes, along with the competition who had traveled from Rockford.

The venue connects to a restaurant titled “Dapper Dans,” a pizzaria. Seats line the room, elevated above the shiny wooden floors, connecting to the bowling lanes.

Cassie Lugo, captain of the varsity team, helps to give an insight on the current season that the girls are partaking in.

“[The season] is going really well. We’re three in one right now, and we got first place in our tournament last weekend,” Lugo said.

The varsity team is made up of 6 girls, 5 of them graduating in 2020. The seniors include Cassie Lugo, Abigail Matula, Rachel Pepke, Gen Porsche, and Jennifer Spielman. Graduating in 2021 is junior Lindsey Spring.

Lugo’s expectations for tonight’s meet were not exactly met due to an unfortunate circumstance.

“We lost one of our varsity players, she was sick. We bowled a really good team,” Lugo said.

The final team score for tonight was 27-14 Huntley, and 27-23 Rockford Auburn. Although the outcome for the team was unfortunate, the girls played an incredible game. They radiated a positive attitude which will surely reward them with the success that they deserve.

The girls have 14 more meets until the end of their 2020 season. The season continues to look bright for the six optimistic girls.