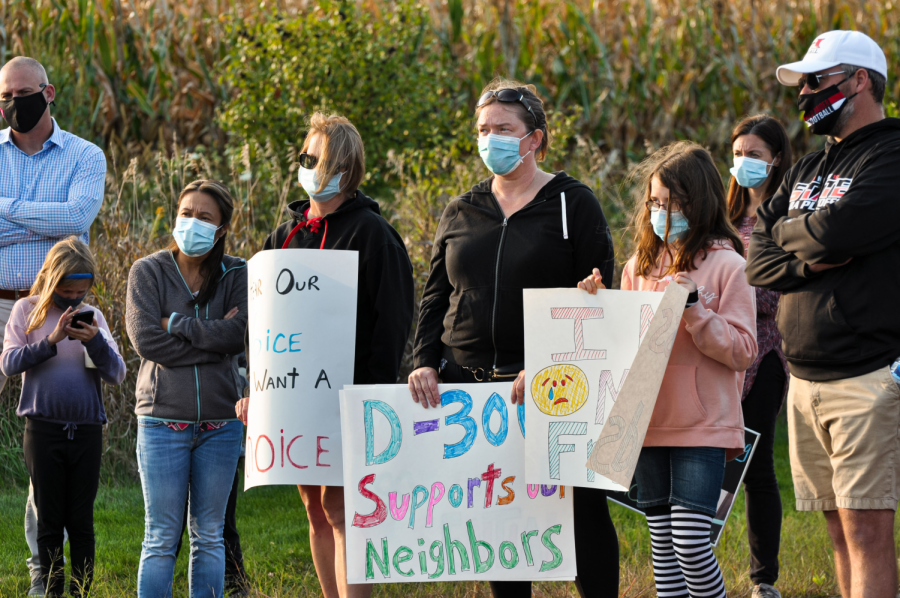 Parent Dana Wiley sits in the second row of the District Office’s meeting room. Wearing a black mask and a Huntley Raiders sweatshirt, she listens as the District 158 Board of Education calls the meeting to order. Without a sign of nervousness, she stands up to address the members. According to Wiley, changes in remote learning need to be made.

About 3 weeks ago, Wiley and fellow District 158 parents discussed organizing a rally before the upcoming BOE meeting on Sept. 17 after hearing about rallies done in surrounding school districts. As a mother of three students who currently attend Huntley schools, she has been dismayed by her children’s struggles during their online learning experience.

“It seems like there’s a lack of transparency in our district right now, that we’re not being provided with a lot of the dtaa or the information that’s going into how [the Board of Education is] making decisions,” Wiley said. “The rally is to try to unite people so we don’t all feel alone [and so] we can see that this is definitely a community that wants to come together.”

From 5 to 7 pm, roughly 50 parents and students gathered outside the Administration Building with signs saying ‘Remote Learning is Not For All,’ ‘Give Families a Choice,’ and ‘Where’s Our Leadership?’

Multiple parents spoke at the rally, while others waited to address the board after its closed session. Their concerns ranged from frustrations with online special and elementary education to a lack of communication with the administration to social emotional health.

“You cannot expect a child with developmental or intellectual delays to be able to attend Zoom for 8 hours a day,” said Kelly Angelilli, mother of a 4th grader in special education. “It is nearly impossible.”

According to parent Laura Krelley, students are losing out on more than just education.

Alongside a solid ‘going back to school plan,’ rallyers want more engagement in the decision-making process, as they feel that their views are not being represented. At the meeting, parents shared their situations and the board responded.

“People have a right to express their views and peacefully gather. We respect and value that in District 158,” Superintendent Scott Rowe said.

The board later announced that grades Kindergarten through 5th grade will begin a hybrid learning style on Oct. 19 depending on stable local positivity rates. More to come on the return to in-person learning. Acknowledging the rally, Rowe expressed the district’s sympathy for families.

“Please reach out to your teacher, or school. We have resources to help if a student is struggling or if a parent is struggling to support [their] child. We may not have all of the answers, but we’re another ear,” Rowe said. “We want to offer and help navigate this tough situation.”

While there is no definite plan regarding middle and high schoolers returning to in-person learning, the rally resulted in a positive conversation.

“I think we had a good exchange of information. We had a lot of parents discuss some of their frustrations, and it stressed what they want to see done,” Wiley said.