On three! Junior Emily Domek finds her passion in cheerleading 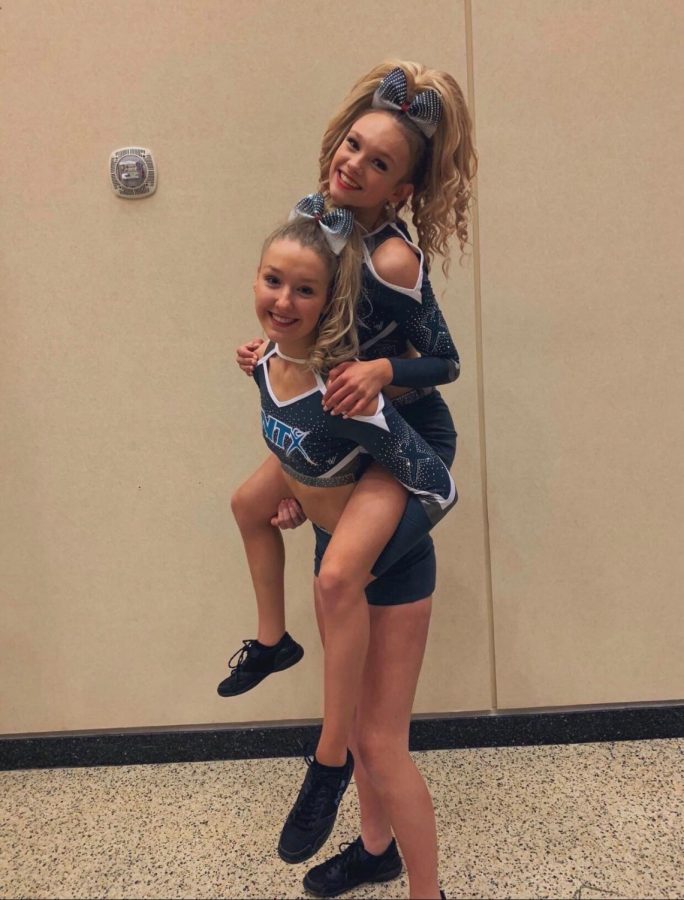 Stadium workers and competing Senior Level 4 teams look at junior Emily Domek and her teammates like they are crazy, but that is okay; screaming helps them calm their nerves. After getting hyped to Miley Cyrus’ “The Climb,” they shake out their wrists and feet for two eight-counts. Then, they are called onto the floor of the Georgia World Congress Center.

Lights blind Domek as fog sweeps around her triple-knotted Nfinity sneakers. She tugs at her sleeves, hoping they do not fall over her trembling hands and ruin her grip. Deep breath in, deep breath out. The air she is breathing is mostly hairspray. Her hands steady and her heartbeat pounds in her ears, drowning out the noise of backstage music, a roaring crowd, and – of course – her own cheering.

This is a moment eight years in the making.

Domek started cheering for the Huntley Park District when she was 8 years old after having watched her babysitter cheer for Huntley High School. For the past two years, she has been a backspot for Cheer Extreme Chicago for the Senior 4 and Non-Tumble 6 teams.

Beginning in June, she practices with a mask on at a gym an hour away in Addison, Illinois, four days a week for 2-3 hours a day with monthly 7 hour practices on Saturdays.

“Whenever I have extra time during the day, I do my work, and after school I finish whatever I didn’t, study for upcoming tests, or work ahead for my classes with the most work,” Domek said.

Luckily, all of the late nights are worth it since being in cheer has allowed her to make new friendships and grow as an individual.

“I love getting to meet new people through the sport,” Domek said. “I love making new bonds with my teammates because every year there’s new people, and it’s just adding to the family.”

As a backspot, Domek has been able to create unique relationships with her flyers based on the integral trust they have when stunting.

“I admire that even when things get hard, she finds a way to make the situation better and turn everyone’s frowns into smiles,” flyer Maddie Parrino said.

Domek’s positive attitude has also made an impression on her coaches as they adapt to new Covid-19 regulations. Because of the mentors she has had, Domek hopes to coach her own team someday and be a role model for young cheerleaders.

“I have seen Emily become a very strong athlete and learn many new skills,” said Lauren Ryan, coach of Domek’s Non-Tumble 6 team. “I have also seen [her] become more confident in herself and become a leader on her teams.”

Ryan coached and Parrino competed with Domek as they attended the CheerSport Nationals competition in Atlanta in February. The Senior 4 team, known as Spice, placed eighth out of 16 of some of the best national teams at their level.

“It was a really cool experience. Not everyone gets to travel with their 16 best friends,” Domek said.

At the Atlanta competition, the music has started for Cheer Extreme Chicago with the lyric “It’s time to spice it up.” All anxiety forgotten, Domek feels her mind go blank as she falls into the routine that has been perfected every practice for the past nine months. Wearing a teal, black, and white Varsity uniform, she breezes through her favorite move, high-to-low, starting with her flyer at the top and catching her in the prep position.

She will do high-to-highs and full-ups with future teams, but for now her focus is on hitting every stunt and staying in the moment. Like the lyrics of her team’s hype song, Domek finds the most enjoyable part of cheer the journey rather than the result.

“Cheer is such a big part of who I am,” Domek said. “It’s not even about winning competitions. It’s just so much fun to do it, go out, and be with everyone.”