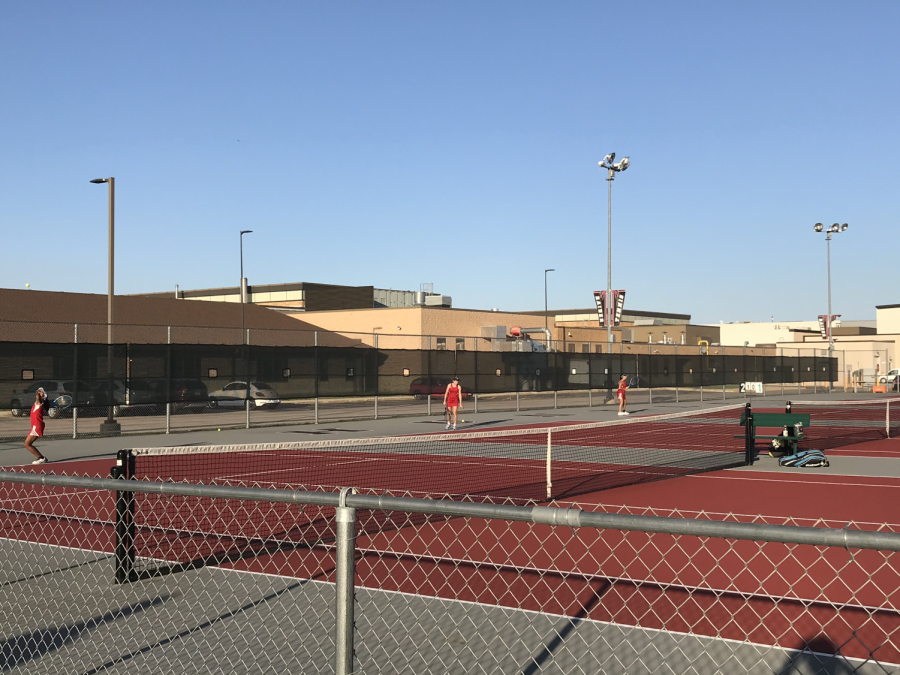 As the girls tennis team, coached by Berry Wells, got ready for their first match in the month of October, they held their heads high and went in with great confidence. The team is fortunate to have a season with the pandemic going on. It is one of the sports that has few limitations due to it being outdoors.

At the match on Oct. 5, Huntley played Jacobs at home. Several different single matches were played, but Parker Amato and Mira Chong took on Makayla Spanier and Nora Roberts in a double exhibition match. In order to win, the girls had to be up by two and have a score of at least eight.

In the first couple minutes of the game, Parker made some great hits that threw the Jacobs’ girls off. Huntley took the lead 1-0 within the first five minutes, forcing Spanier and Roberts to pick up the effort an extra notch.

As the game picked up, the girls rallied for several minutes, and as they got more tired, points started being scored by Huntley as the Jacobs’ girls hit the ball out of bounds several times. 15 minutes in, Amato and Chong still had the lead 4-1, but Jacobs put a point on the scoreboard.

Spanier and Roberts worked well together, calling out who had the ball and hustling across the court, getting them an extra two points mid-game. Nearing the end of the match, Amato made several strong serves that led to points, keeping Huntley in the lead 6-3. Effort was matched by both sets of girls, and it seemed each time Huntley scored, Jacobs was right there with them doing the best they could.

Eventually, the final two points were scored and the Huntley girls took the win. Although this match didn’t count towards their season, it helped keep them prepared for important matches in the future. The Huntley girls played a hard game, taking the win 8-3, and keeping Jacobs on their toes the entire time.