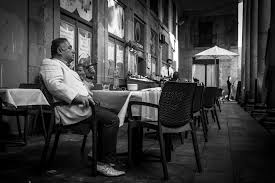 Possibly one of my favorites, Martin Scorsese’s “Goodfellas” is truly a violent and emotional rollercoaster of a movie. In my opinion, it is by far one of the best gangster movies and it still holds up 30 years later. The movie is directed in a way where the characters are despicable, however they are presented in such a way that the watcher likes them.

Set in the glamorous yet cutthroat ‘50s, the movie follows the life of Hill, from his childhood as a poor kid living in New York through his adult career as a member in a mob.

One of the many fantastic scenes in the movie begins with Hill as a teenager. We are shown a closeup of his eyes which then cuts to outside his apartment. As the camera switches, the watcher sees Henry’s perspective as he looks out his window. We see how he looks intently at a group of gangsters outside, and shots of their cars, jewelry and suits are emphasized.

It then cuts back to Hill from outside his window, his blinds like horizontal jail bars covering his face as he looks out. One can interpret this as showing how Hill feels trapped in his poverty-stricken life compared with the powerful and unrestricted lives of the gangsters.

One of the film techniques Scorsese used most often is freeze frames, frequently occurring when Hill was a child. Each time a freeze frame occurs in his childhood, Hill narrates the importance and relevance of each event as an adult.

A bothersome theme in the movie is how each member in the mob feels they need to prove their masculinity, whether it be physically overpowering people to get what they want, or having girlfriends on the side. Pesci’s character Tommy DeVito expresses this trait more than any other character, who ends up assassinating multiple people, one being an important rival gangster, which causes DeVito’s impending doom.

Karen Hill is most likely the most important character in the film because she is the most relatable character in the entire movie. Her relationship with Henry Hill starts off as sweet and extravagant as Scorsese shows in the long sweeping shots of their dates, but ends up as toxic and abusive. Although she eventually comes to terms with how toxic her marriage is, she cannot bring herself to leave Hill because she loves him.

The fashion and fantastic cinematography combined with the soul-stirring plot is what makes this film so classic and captivating. I recommend this movie to those who love powerful, action-packed and beautifully captured stories.