The life of a young hockey player 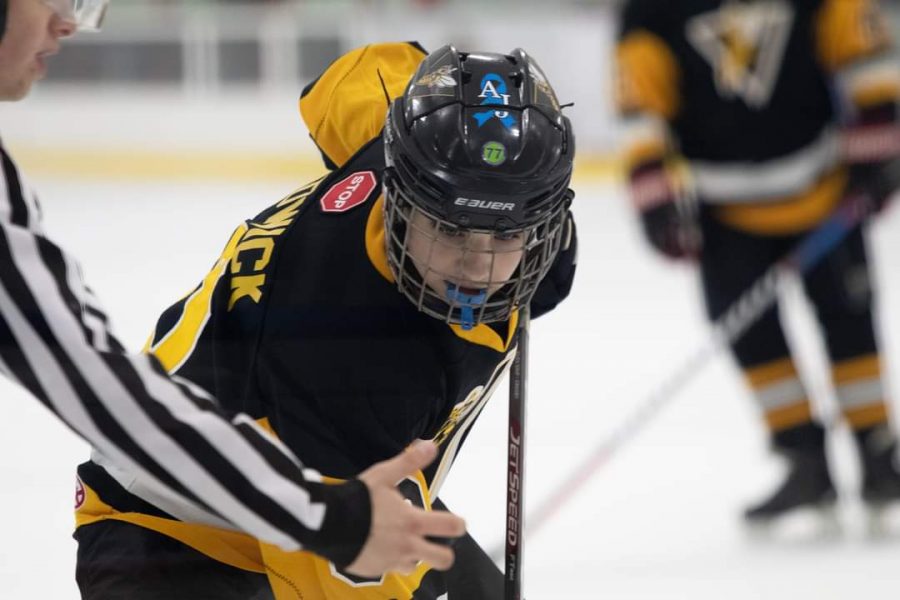 As his team enters the rink, the cold air rushes past their bodies. They slide around the ice with perfect grace and control. They practice taking shots at the goal and work on doing specific drills; their entire team flaunting their skills. Their competitors, the Glenview Stars, arrive on the ice bringing the same intense game face.

As the game is about to start, Jeremy Chadwick slides in the center of the rink. His eyes have turned into a laser-like focus on the puck. His 5’ 11’’ frame gives immense force into his swing as he rushes to be the first to get possession of the puck. He gets a jolt of adrenaline and puts his game face on. Let the games begin.

Chadwick is a freshman who lives and breathes hockey. The sport is more than a hobby for him.

“[What got me into hockey was] family. My grandpa was obsessed with hockey growing up so I used to go to the local center with him and skate after school,” Chadwick said.

Chadwick has been skating since he was 4 years old. Whenever his family has the television on, it is more than likely a hockey game.

He played his first season at the West Dundee Leafs when he was younger and then moved to the Crystal Lake Yellowjackets and has been there ever since.

Growing up, Chadwick played a multitude of sports including basketball, baseball, and a lot of soccer. Hockey was just something that felt right to him. He always put the most effort into it and had the most fun. After he joined his first hockey travel team he never looked back. It came naturally and he knew it was meant to be. Hockey chose him. It was the easiest decision he has had to make.

Not only has he played so many sports, but he has tried many different positions in his sport. He likes to get a feel for all the positions.

“I varied for a while… This year I started [as the] wing… [but around two weeks ago]I started playing center..o, so I’m probably going to finish the season playing [as a] center,” Chadwick said.

Just like any other sport, he frequently has to get new equipment. The constant recycling and buying new gear is very expensive, but very much needed for a variety of reasons.

“I have to get new [major] equipment.. like once a year. [Getting new] skates [has] a lot to do with the fact I am growing. Right now I’m wearing a size 11 shoe and I’m currently wearing a size seven skate, I don’t even know how though,” Chadwick said.

This year because of COVID-19, their practices have been more restricted, but before the pandemic, Chadwick would play four or five times a week.

“Not that anybody is counting, but I’ve been counting the entire season: in 15 games I have 26 points: 16 goals and eight assists,” Chadwick said.

Even though he may look like the perfect, all-star player he has had his fair share of fumbles and embarrassing moments. As an athlete, we all make mistakes. After all, it is a part of the game.

“There was one play when I was like nine or 10 and it was in a Championship tournament game. I wiped out and fell into our goalie, and the puck went off of me and into the net. Well, we ended up winning that game so it’s fine,” Chadwick said.

Chadwick ends the game, but he feels accomplished. Out of their 3-8 score, he had scored two goals and had one assist, which to most people is an awesome game.

Right now he is not focused on playing in college or the NHL, his focus is primarily on the high school team and making the most of it.

“I’m really excited for the high school team. I’m nervously excited, but it’s nice to be that because I’ve never really felt nervous for a tryout in the past five years. It will be really exciting to see what happens sophomore, junior, and senior year,” Chadwick said.

Chadwick is on a great path for something he is so passionate about. He has been working so hard towards this sport and will continue doing so.

“ just think it’s fun. I always look forward to hockey. It’s not something I dread like a chore. Every time I go it is fun for me,” Chadwick said.