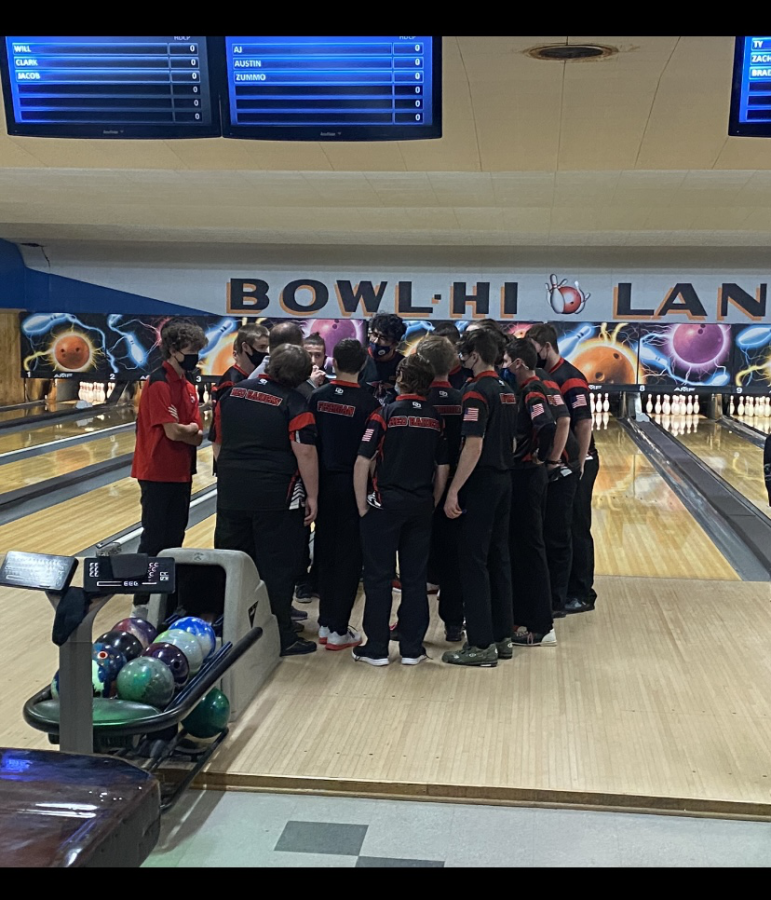 Crowding around tables at Bowl-Hi Lanes, varsity players of the boys bowling team wait for their competition to arrive. When they are finally ready to play, AJ DeBello is the first to roll the ball, gaining the team their first strike. Almost immediately after, Hayes Porsche and Austin Tenglin follow with spares.

On Dec. 2 the varsity boys bowling team played against Woodstock High School for their eighth game of the season, and it was another big win for the team as they won 3152-2627.

“The season has been going amazing. We’re 8-0, and we just need to keep this up,” senior Porsche said.

Coach Jacob Wagner describes how during this meet some of the players really stepped up and put all of their effort into their sport.

“I am ecstatic about how this season’s going… We’re shooting about 3,000 pins every night, and tonight we shot 3,152 pins which is big,” coach Wagner said. This is not a new result for the team as they did almost just as well at their Nov. 16 game.

Not only was the whole team doing very well, but there were also individual players that put their all in.

Porsche was a real show stopper with scoring the highest 258 points the first round, and then again the highest 254 for the next round. He also had the highest total score of 687.

For the third round senior Nick Zummo kicked it off with 7 strikes in a row, ending with the highest score of 238 for that round. He also had the second highest score for the varsity team scoring 666.

No matter what, the boys were giving one another pats on the back, cheering for one another, and overall supporting their teammates. A high morale was not the only thing gained during that meet as Huntley remains undefeated.

“[The team] came out really strong. We have our ups and downs, but mostly ups, and it’s only going to get better,” Zummo said.