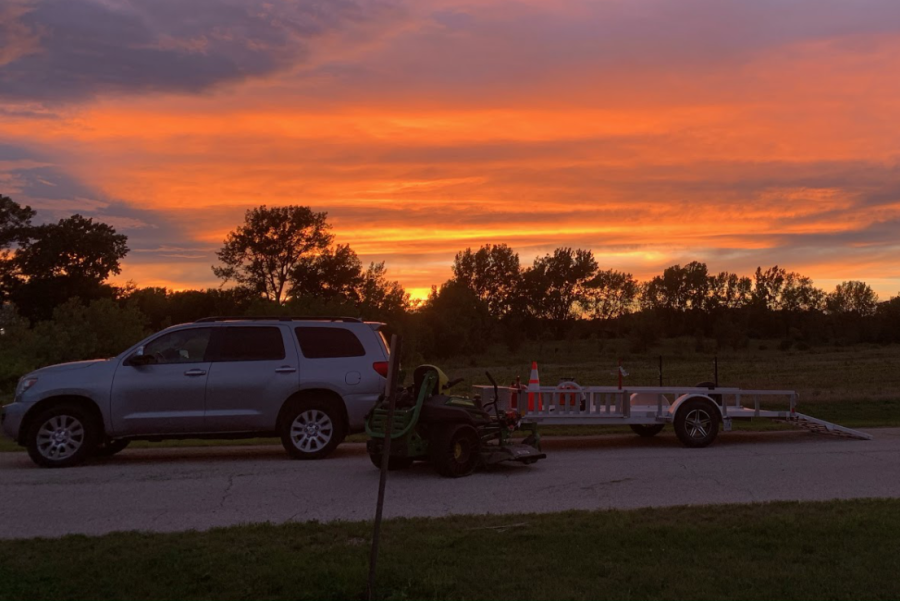 Success is tough to achieve.

Events, people, and the environment constantly get in the way of finding self-satisfaction. Not only must you play your cards right, but you also need to weave through competition to grow yourself.

Two years ago, Huntley High School senior Craig Graf used the idea of landscaping for others as a side hustle. Now, he is setting his successful landscaping business aside to study business in college.

“He was showing a lot of entrepreneurial spirit and really great work ethic,” said Sonia Graf, Craig’s mother. “He would get up super early, and he would be proud of the job he did.”

Graf started mowing lawns when he was 13 years old. At the time, working for himself was only a hesitation. He was satisfied with the idea, especially since his father is a business owner, but it was too early to tell.

Landscaping kept Graf’s interest for years, and he decided to follow through with the entrepreneur idea in early 2020. After quickly picking up two cross-neighborhood accounts for lawn mowing, he was steps away from a dream becoming a reality.

“My parents said ‘you already have two accounts, I wonder what else you can do,’” Graf said. “When 2021 came around, I wanted to see how big I could get it.”

Graf extended his service list going into 2021. The addition of mulch jobs, aeration, and spring cleanups provided interested consumers with many reasons to hire Graf.

Sooner or later, Graf was adding on multiple jobs by using any free time to work.

“When we were hybrid, I was blended [during] fourth hour and had lunch [during] sixth hour, so I would drive around and give people quotes,” Craig said. “I wasn’t getting too many jobs, but I was making a lot of connections.”

When the 2020-21 school year came to an end, Graf would work 60-hour weeks, splitting up time between his business and his part-time job. His schedule went smoothly up until his senior year started when he had to push all of his jobs to the weekend.

“School was a pain,” Graf said. “I had to move all of my jobs to the weekend, so I was doing 14 yards [per] weekend, which was super stressful.”

Despite the stress, Graf continued to push through. Around this time, he started advertising for fall aeration, fall spring cleanups, and winter snow plowing jobs.

When Graf’s college decision came around, he set the landscaping business to the side. He plans to continue his entrepreneurial success, though, as he is majoring in business at Montana State University.

Graf’s peers believe the hard work and dedication he has put into his craft is clear.

“He has the best work ethic that I’ve ever seen in an entrepreneur,” senior Michael Wright said. “COVID-19 took a toll on the motivation part, but he stuck through it all and handled it pretty well.”

Graf’s parents experienced his success and dedication the most. Summers and weekends consistently included early mornings and late nights, and on some days, he would be out for well over 12 hours.

The inspiration to start a business came from Graf’s father, Todd Graf, who is a very successful entrepreneur.

“My dad helped me and told me I could do it,” Graf said. “The inspiration was mostly from my dad, even though he does not care about landscaping.”

The amount of labor, services, and commitment Graf put in was his idea, though. He used creativity, research, and confidence to sell himself and his business to customers.

Success is not easy, but Craig fought through the roadblocks. While the landscaping business is over, his diligence, motivation, and dream to make it big are still there.